Every year, my grandparents had traveled around Japan since 1965,
one year after Tokyo Olympic.
When they visited Tohoku area, it was always a pleasure for my grandmother to get a Kokeshi, a doll traditionally crafted in this area.
Until 1990s, she collected as many as 11 Kokeshi, and it is now her small collection.

I visited Sendai, the biggest city in Tohoku last month
where I never failed to fall in love with Kokeshi.
Frankly, I was totally indifferent to Kokeshi that my grandmother has.
And I was even surprised
when my Norwegian friend returned Tokyo with several vintage Kokeshi from her trip Tohoku !
This time, it was my turn.

I was instantly fascinated by the beauty
when seeing Kokeshi displayed at one of the shop in Sendai.
Each Kokeshi has different face, patterns and shape according to its craftsman and the area where it was crafted...

At an independent book store in Sendai, I came across one second-hand book ( a small dictionary listing name and address of traditional Kokeshi craftsman. )
I felt my next duty is
to look for a craftsman who made old Kokeshi in my grandmother's collection.

Here is the drawing of Kokeshi in her collection.
My duty is almost done
but I need to know who crafted this Kokeshi wearing Kimono.

In Japan, today is the cat day !
So let's celebrate their meow life !!

Here is a quick gif animation dedicated to one of my cats.
His tiny short tail aggressively moves
when he seeks for a chance to play with other cats at home.
Sadly others don't like him that much because he shows too much love for them
( oh so poor !! ),
though he never gives up.

I love this cat all the more for his clumsy tenderness and caring to others.
- February 21, 2020 No comments:
Email ThisBlogThis!Share to TwitterShare to FacebookShare to Pinterest
Labels: cat, illustration, illustrator, japan

This is a cactus I bought almost 20 years ago,
when I was the last grade of my elementary school.
On the way back home from my grand mother's home,
we would drop by one of the shopping centre where I got this one.

This is also a nice memory from the summer. 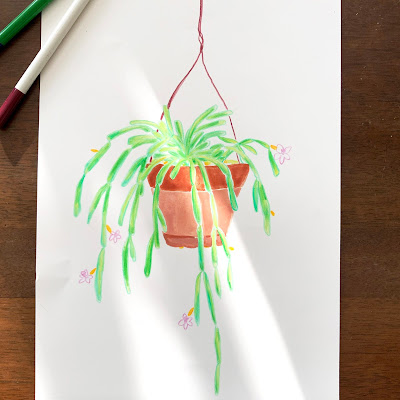 Now, one of my cactus blooms its white flowers.
Although they are so tiny, it's amazingly lovely and elegant.
This is the one I bought at a gallery space in Nakano, Tokyo.
It sadly and happily reminds me of my last few years there.

Looking out from the window in my room where this cactus is hung,
it is snowing silently.
And these tiny flowers are just as white as snowflakes.

Today I miss the summer day
when I bought the cactus after a night out in my hood. 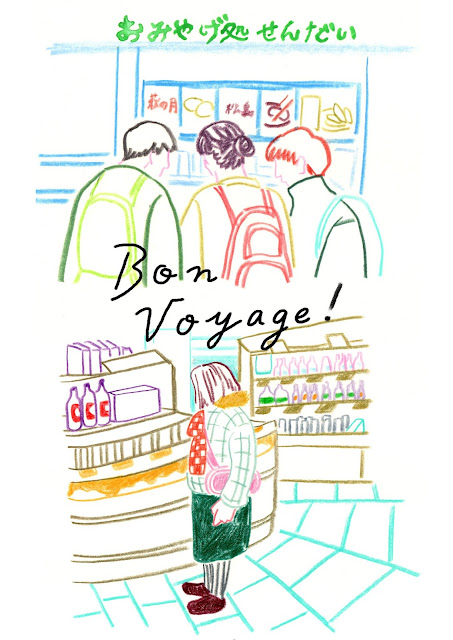 I love watching travelers buying souvenirs for their loved ones.
I was spying on them from the window of a cafe and did a quick sketch of them :)
- February 14, 2020
Email ThisBlogThis!Share to TwitterShare to FacebookShare to Pinterest
Labels: illustration, illustrator, japan, sendai, trip
Location: 日本、宮城県仙台市 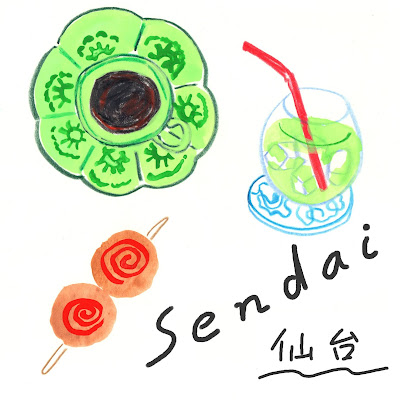 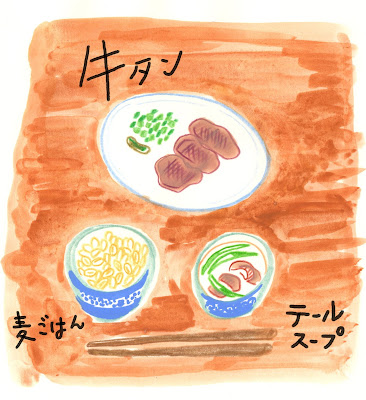 Last month, I had a very quick trip to Sendai in Tohoku area.
Surprisingly, it was my first visit there.
So as a typical tourist, I had Gyutan for lunch and took a break at a nice cafe,
and fell in love with Kokeshi and of course bought some Sasakama for souvenirs.

Here are the drawings I sketched during my stay.
Firstly, a lovely cup of coffee, Hyoutan Age ( Fried Sasakama )  and melon soda :).
Secondly, the delicious Gyutan lunch.

What is your most favorite film ?
//
Addieu Philippine is my answer.
Summer vacations, youth and love, this movie has all things we're gonna miss.
Like an ephemeral dream. But it surely casts the shadow of the reality that youngsters around 1960s were facing, war and their obscure future.

Especially I love one of the scenes where  Yveline Cery ( Lilianne ) smiled mischievously and stirred up enmity to Juliette when three drove down the mountain. Then the brilliant music started and took us to the end of the movie...

Hi, I'm an illustrator from Japan.
I love to draw with color pencils on paper.

I'm a movie & record enthusiast and am secretly addicted to chocolates.
No need to say, I'm the oldest sis of 4 cats :)

Hope you'll enjoy my journey as an illustrator !